There’s ordinary mail, and then there’s mail that makes you stop in your tracks. Chances are you’ve saved a thank-you card or wedding invitation you just couldn’t bear to toss in the recycling. Nonprofit event marketing in particular depends on that kind of emotional reaction. When you’re the one in charge of designing an invitation for your biggest fundraiser you aim for the double-take. Especially if your special guest happens to be Captain America. 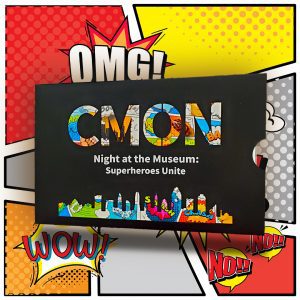 The Golisano Children’s Museum of Naples (CMON) hosted its 2022 Night at the Museum gala on Friday, February 18. Night at the Museum: Superheroes Unite was created to be a fun and playful night for a serious reason—helping the children in the community. But to be successful, the event had to draw the right amount of attention–and attendees. Kayla Allen, Creative Services Manager for CMON, took that challenge head-on. “Every year, we try to make a huge splash. We’ve done everything from pirates to British Invasion,” explains Allen. “With a theme like Superheroes Unite, there was so much we could do. But when you’re trying to create a truly memorable evening, all the little details really matter.”

To make an unforgettable first impression, Allen zeroed in on the event invitation. After mocking up what she had in mind, she reached out to Naples Print Source to bring it to life. “Blase came in with invitations that he worked on in the past, substrates for us to see and touch, and examples of print techniques that he envisioned for this project,” Allen says. “His team has an amazing track record when it comes to nonprofit event marketing. His samples and suggestions really inspired us. He picked up on our vision right away and really helped us run with it!”

“In the initial meeting, CMON struggled with what sort of envelope to use. I don’t think I brought a sample to the meeting, but I mentioned that we had used clear envelopes before. CMON was really excited about that idea. It gave them the ability to show some artwork before the invitation was even opened,” explains Ciabaton.

After a successful brainstorming session, Allen went back to the drawing board to finalize design and get internal buy-in. To make sure the vision could become a reality, Allen sent her ideas to Naples Print Source to architect the final piece. 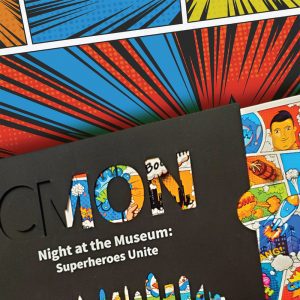 Ciabaton was able to bring technical expertise and a perspective on how to take things up a notch. “We’ve worked with CMON for years. You don’t want to duplicate anything else you’ve done. Every year needs to genuinely surprise and delight, from the invitation to the placeholders on the tables.”

“It’s just crazy competitive, trying to get your key donors to show up at these fundraising events,” explains Blase Ciabaton, President of Naples Print Source. “To get this exactly right, it was probably a six to eight months process.”

Naples Print Source brought more than innovation to the table. “Budgets are tight across the board, but particularly for nonprofit event marketing,” Ciabaton says. “We work with our clients to bring costs down as much as possible. We were able to help CMON design within specs that would qualify for nonprofit postage rates and use budget-friendly techniques that have an enormous impact.”

All this effort paid off. The event was a huge success and a welcome return to normal after having plans derailed due to the pandemic. “Blase and his team really are superheroes,” Allan says. “From design to production, they’re the best sidekick you could ask for.”

Like what you’re reading? Have you signed up for our enews yet or are you following our blog’s rss feed?

Please share examples of inspirational invitations you’ve seen or created in the comments section below.